“Lovers,” by Tony Daniel, which originally appeared in the anthology Forged in Blood, edited by Michael Z. Williamson, and set in his Freehold universe, is collected again in The Year’s Best Military and Adventure SF, Volume 4, edited by David Afsharirad. The electronic advanced reading copy, a special ebook early edition (with typos included), is available for sale here. The print edition will be out in June 2018. 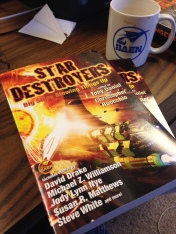 Initial copies of Star Destroyers, an anthology edited by Tony Daniel and Christopher Ruocchio, are in at the Baen office. The book will be at booksellers in March.  Star Destroyers has some great stories by many Baen-Books-related authors.

The basic idea of the anthology is there on the cover. Big ships. Blowing things up.  It’s about large spaceships and starships, enormous and enormously powerful, in big futures where contention is rife. Will the future have anything like this? Who the heck knows. But the stories are fun.

Star Destroyers has an introduction by Tony Daniel on the idea of the battleship in science fiction. You can read it for free here.

The Amber Arrow, the sequel to The Dragon Hammer, is on the way to booksellers everywhere in September 2017. That’s Ursel Keiler on the cover, by the way, the expert archer and adopted daughter of bear people, from The Dragon Hammer.

A stack of The Amber Arrow author copies.

The first chapter of The Amber Arrow is in Ursel’s point of view.

Tony Daniel will be at Quail Ridge Books in Raleigh, North Carolina, U.S.A.—the all-new location—on July 28 at 7 p.m. to talk about The Dragon Hammer and more. Please come out if you are in the area! For more information click here.

The Dragon Hammer, Book 1 of Wulf’s Saga, is now available at booksellers everywhere

The Dragon Hammer, Book 1 of Wulf’s Saga, a new high fantasy series, is now available at booksellers everywhere both in print and ebook form.  Find many links to booksellers by clicking here, or get it at your local bookstore!

The Dragon Hammer is Available at Booksellers Everywhere! Click here for details.

The ebook “Advance Reading Copy” of The Dragon Hammer is now available! This is the post copyedit, pre-proofread version (so it has typos and such) that is put out by Baen several weeks before the official publication date. Get The Dragon Hammer eARC here.

Pre-order The Dragon Hammer via Simon and Schuster.